We are delighted to announce that after two and a half years of development, our local group in Brazil has become an independent Chapter of the Open Knowledge Foundation. This achievement is made more special by the fact that Brazil is our first full Chapter in the global south.

Over the last two years, the local group in Brazil has developed a strong national network for open knowledge, called “Rede pelo Conhecimento Livre”. They are running a Portuguese version of the Open Knowledge Foundation’s School of Data, Escola De Dados, disseminating the skills and know-how to push forward the movement for openness in the Portuguese-speaking world. Individual projects have included Brazilian budget visualisations, and a strong local open science community.

The Open Knowledge Foundation now has a global network of over 40 local groups covering everywhere from Bulgaria to Bangladesh. Seven of those have now progressed to full Chapter status: Brazil, France, Greece, Switzerland, Finland, Belgium, Austria

“We’re proud to be the first Open Knowledge Foundation Chapter outside Europe, in a country with a young democracy where access to knowledge and openness will be a key to its development. It’s been a fantastic couple of years for open knowledge in Brazil, laying the foundations for a strong civil society movement for greater openness. We’d like to thank everyone who has worked so hard to make this possible, and we’re excited about the coming years. We hope to see other emerging countries joining our global network to open up knowledge and foster development everywhere!”

“We’re delighted – and excited – to welcome an official Chapter of the Open Knowledge Foundation in Brazil. It's a region where there are huge opportunities and challenges for open data and openness more generally. The Chapter is already doing important and inspiring work, and it's fantastic to have such a dynamic new group in the growing Open Knowledge Foundation global network.” 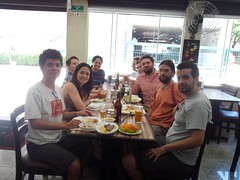